Find this article at:
go.ncsu.edu/readext?512837
— Written By Rachel Vann

Crimson clover and hairy vetch are both legume cover crops that produce substantial biomass in North Carolina, however they both have disadvantages. Hairy vetch produces hard seed and this can create weed control problems in subsequent winter crops. Crimson clover experiences maximum growth on a narrow range of soil types. Winter pea is an alternative legume cover crop that can be produced in North Carolina and has the benefits of easy termination and no hard seed. Limited work has been done comparing winter pea genotypes to crimson clover and hairy vetch for cover crop production in North Carolina and even less work has been conducted on legume biomass production in mixture with a small grain. 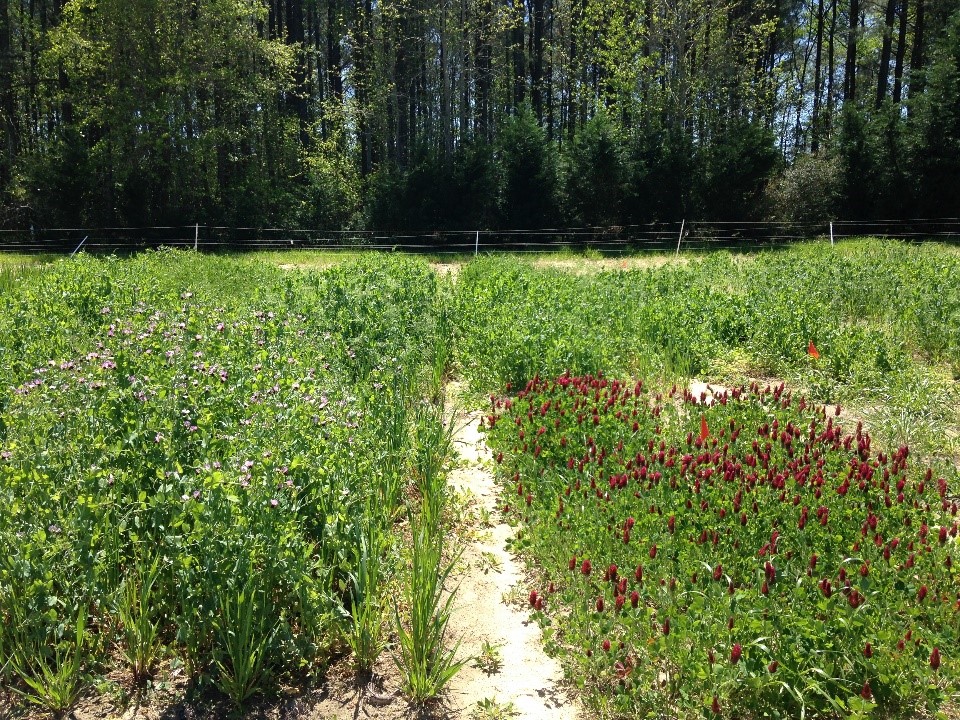 The objective of this study was to compare five winter pea genotypes to crimson clover and hairy vetch for biomass production in mixture with various small grains. 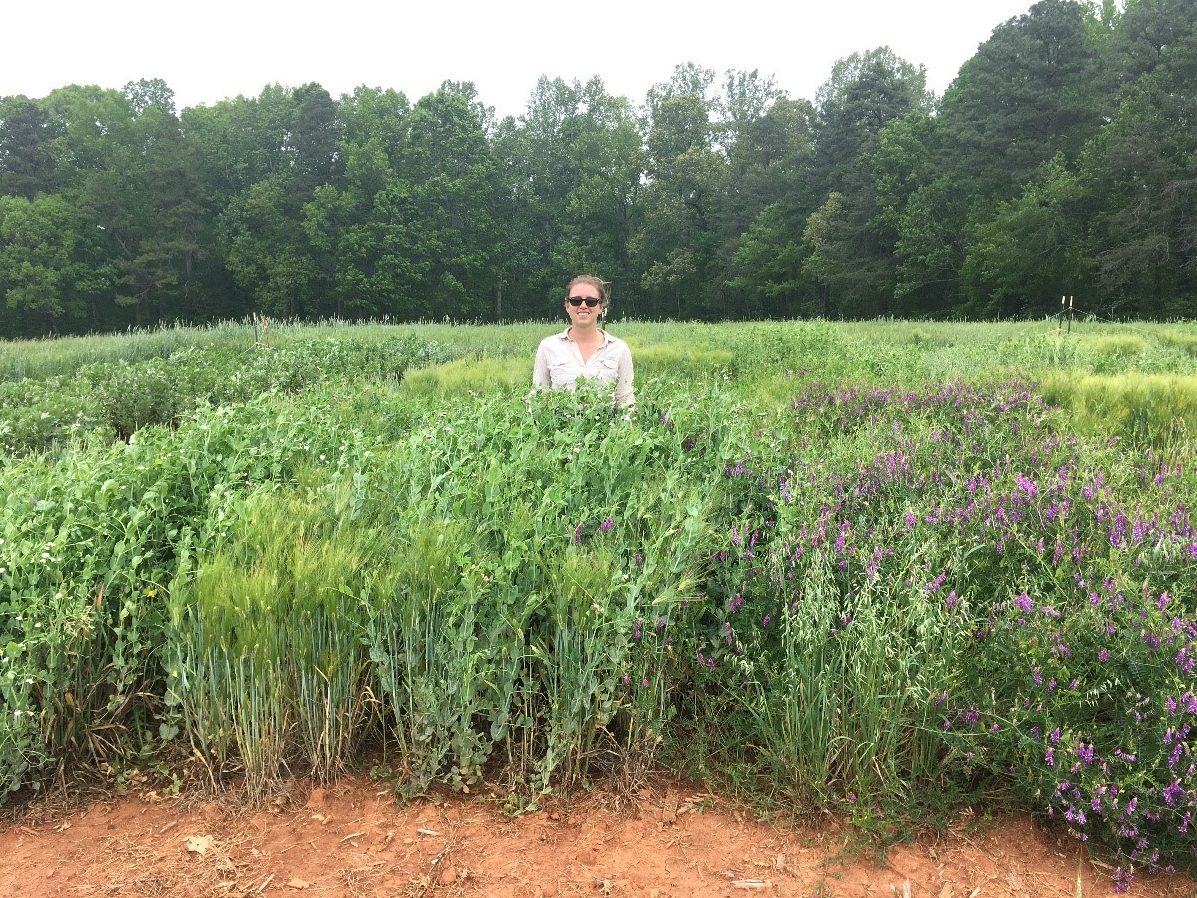 Pea and barley mixture plot compared to a hairy vetch and oat mixture plot at the Piedmont Research Station in Salisbury, NC.

Four released winter pea cultivars: [CAH-11, Common, Romack, and Nature’s Choice (a cultivar readily available in North Carolina)] and one advanced winter pea ARS breeding line [PS0017018W] were compared to one crimson clover cultivar (AU Robin) and one hairy vetch cultivar (Purple Bounty). These pea genotypes were visually selected from a biomass screening of eighteen pea genotypes in North Carolina from 2014 to 2016. Each legume was produced in mixture with barley (cultivar=Thoroughbred), oats (cultivar=Gerard 224), and wheat (cultivar=NC Yadkin). Winter peas were seeded at 60 lbs/acre, crimson clover and hairy vetch at 20 lbs/acre, and small grains at 30 lbs/acre. The mixtures were drilled in 7-inch row spacing from late September through mid-October. Biomass (plant dry weight) was determined in early to mid-May when the small grain reached soft dough stage. Barley generally reached soft dough stage one week prior to oats and wheat. The cover crop mixtures were not fertilized. No herbicides were used and these mixtures were very competitive with weeds.

Legume cold tolerance: Generally crimson clover and hairy vetch were more cold tolerant than pea in North Carolina. Cold damage was observed on several pea genotypes across the sites, but this injury was transient and the peas were able to recover by early March. Experience working with many pea genotypes over the past several years indicates that there could be some cold damage (foliar necrosis) following very cold weather events but most pea genotypes will survive the North Carolina winter.

Legume disease incidence: Pea continues to be the most susceptible winter legume cover crop to disease in North Carolina. Pea production should be avoided on fields with a history of Sclerotinia pressure. The Kinston site had Sclerotinia pressure and this greatly restricted cover crop biomass production late in the season. Other pea diseases observed included powdery mildew and Ascochyta blight, but these appeared to have a minimal impact on biomass production. 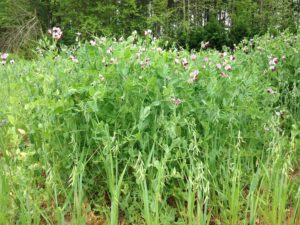 Pea and oat mixture at the Central Crops Research Station in Clayton, NC. 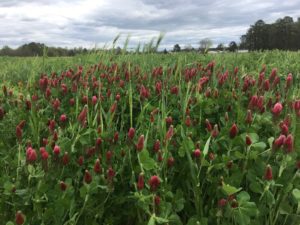 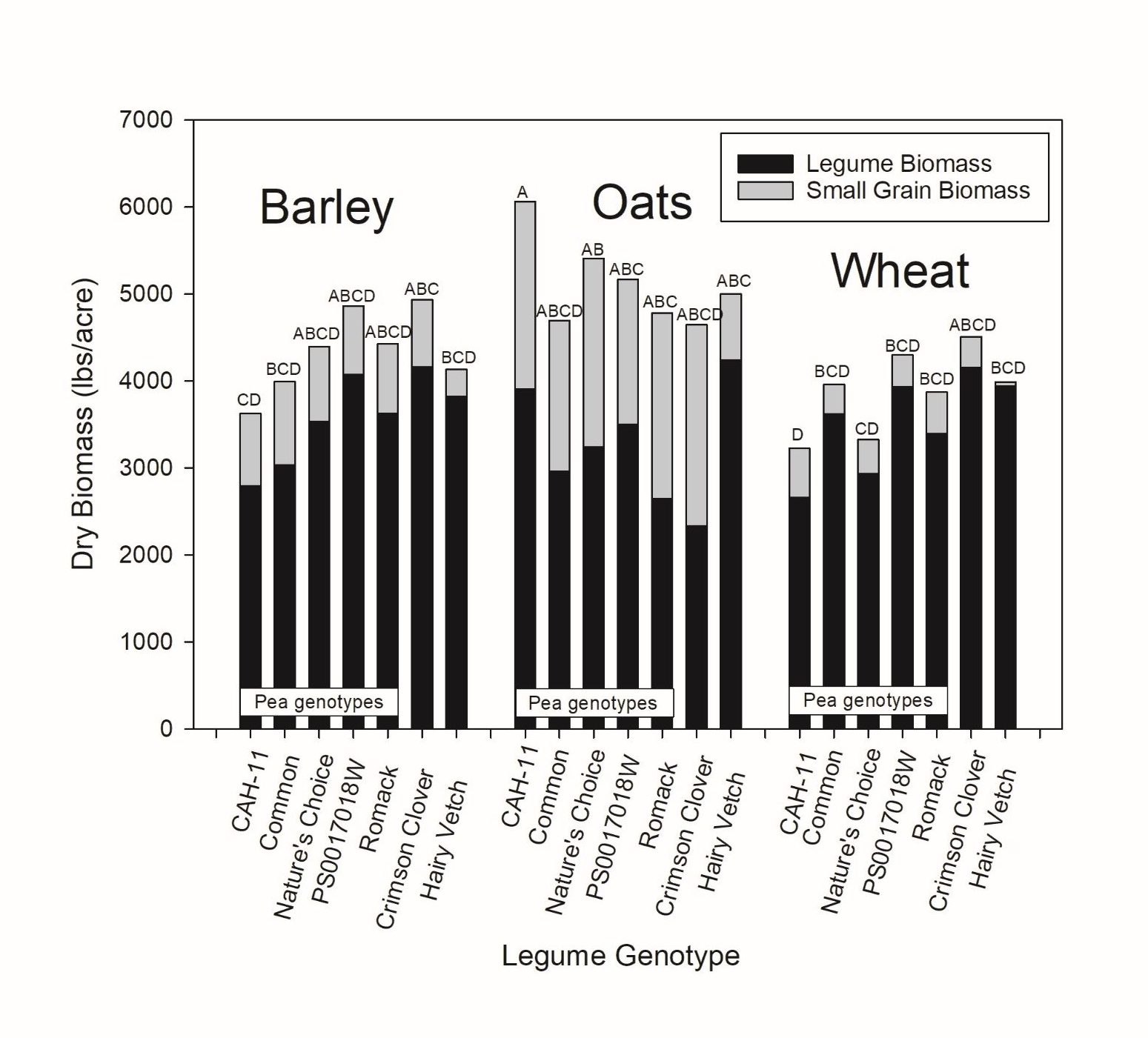 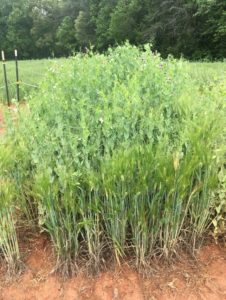 Pea and barley mixture at the Piedmont Research Station in Salisbury, NC.

At this site, cover crops were planted in late September and wheat growth was severely inhibited by Hessian fly. Cover crop wheat is often planted earlier than wheat for grain; if producers are going to plant their cover crop mixtures before the Hessian fly free date they should exercise caution using wheat for risk of Hessian fly damage. Some barley genotypes are also susceptible to damage from Hessian fly. Barley and oats produced similar biomass at this site (P=NS). Total biomass production was between 5,250 and 11,600 lbs/acre at this site (Figure 2). Several pea genotypes produced as much biomass as crimson clover and hairy vetch (>3000 lbs/acre), however pea biomass was reduced with Nature’s Choice, the pea cultivar widely available in North Carolina (1440 to 1700 lbs/acre, Figure 2). Considering the small grain was seeded at approximately 30 lbs/acre, the small grain biomass production in mixture was impressive at this site except when produced in mixture with hairy vetch. Similar to the observations in the Coastal Plain, hairy vetch was very competitive with the small grain in mixture and restricted small grain biomass production. 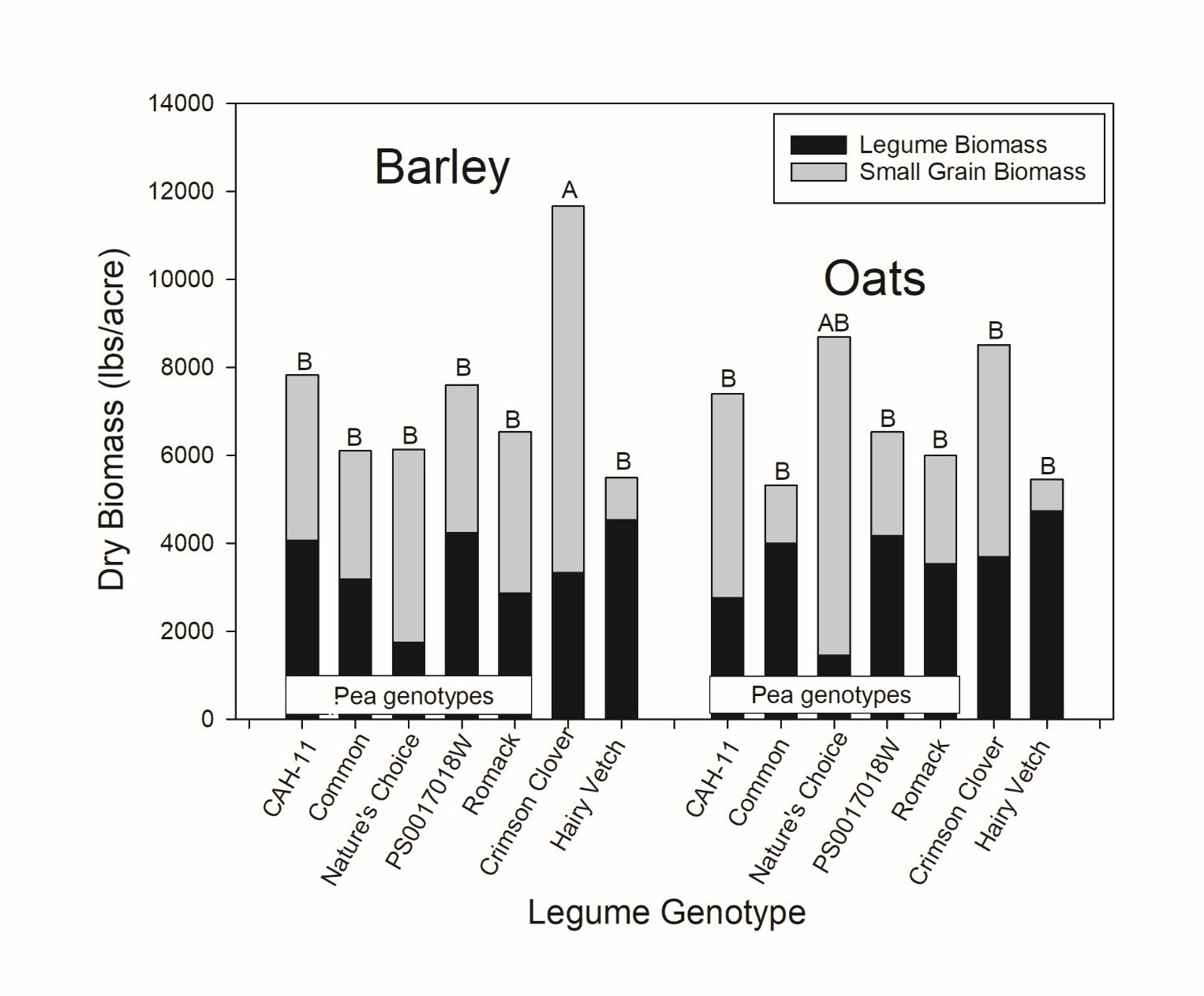 Figure 2. Cover crop biomass at the Piedmont site (Salisbury 2017). Wheat had very poor survival at this site due to Hessian fly pressure following an early cover crop planting date (late September) and was excluded from the analysis. Mean separation letters are used to differentiate total biomass production of the cover crop mixtures.

A big thank you to the Southern SARE (GS14-135) and the NC Dairy Foundation for supporting this research.