New Research on Winter Peas for Forage, Grain, and as Cover Crop in NC

Find this article at:
go.ncsu.edu/readext?394034
— Written By Rachel Vann and last updated by Molly Hamilton

A field screen of available winter pea genotypes has not occurred in the Southeast and farmers are limited to using varieties which have been developed in other U.S. regions. Field screening of available winter pea germplasm will allow for identification of genotypes that experience maximum growth potential in the Southeast and catalyze regionally adapted variety release.

Research was conducted in Clayton, Kinston, and Salisbury, North Carolina from 2014-2015. Nineteen winter pea genotypes were evaluated in monoculture and in mixture with different wheat maturities commonly planted in North Carolina. 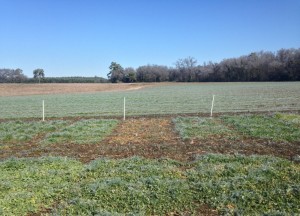 Picture 1. One winter pea genotype of the nineteen evaluated had poor cold tolerance across all locations.

Some winter pea genotypes included in the trial are winter pea varieties available in other parts of the U.S., while some are advanced lines in Dr. Rebecca McGee’s program, a USDA legume breeder in Pullman, WA. The standard winter pea available in North Carolina was also evaluated for comparison purposes. Research plots were established in early-mid October 2014 using a small plot grain drill set on 7 inch row spacing. Winter peas were evaluated for cold tolerance, disease resistance, biomass production, and grain yield. Harvest occurred during June 2015. 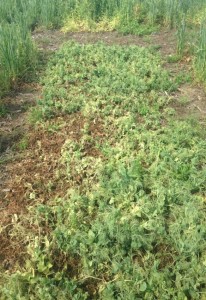 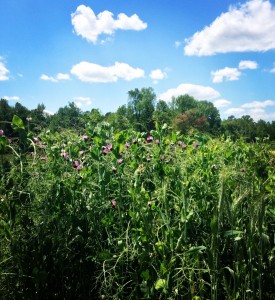 Visual ratings indicated that several winter pea genotypes included in the trial have promise for use as a cover crop due to high biomass production. Cover crop biomass data will be collected and analyzed for nutrient content during the 2015-2016 winter pea growing season. All wheat varieties included in the study reached maturity prior to all winter pea genotypes. Grain was harvested in mid-June using the soybean sieve in a research combine. Grain was harvested for both winter pea monocultures and winter pea/wheat mixtures with minimal grain loss. 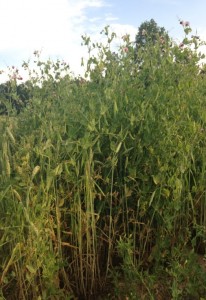 Yield results were only obtained from the Clayton location. Results from this location indicate that some winter pea genotypes experience higher grain yield when grown in monoculture while others produced higher grain yield when grown in mixture with wheat. Results from this location indicate that many winter pea genotypes included in the study have the potential to out-yield the winter pea variety currently available in North Carolina. Grain yield data from additional locations and years in North Carolina is necessary before reliable grain yield data can be provided.

Additional research trials will be conducted over the next several winter growing seasons to expand upon results obtained in the first year of this trial. Replications of the grain trial conducted in 2014-2015 were established in Clayton, Kinston, and Salisbury, NC during October 2015. Two additional trials were also established in October 2015. One will evaluate the same winter pea genotypes in monoculture and in mixture with oats, barley, and wheat for use as a forage and cover crop. Winter pea biomass will be collected and samples will be analyzed for nutrient content and forage quality. The other trial established will evaluate available winter pea varieties throughout the United States for grain yield in North Carolina. 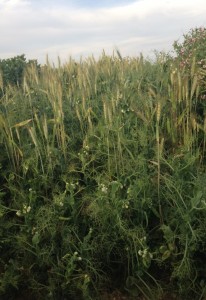 Picture 4. A high Picture 5. A semi-dwarf winter pea genotype which did not climb up wheat. Some of the shorter winter pea genotypes evaluated in the trial were the higher yielding genotypes, indicating different growth habits may be preferably for use as a grain and cover crop. 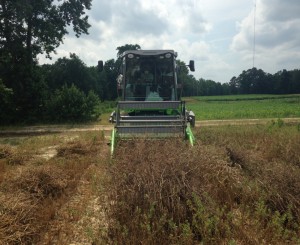