Find this article at:
go.ncsu.edu/readext?276943
— Written By Chris Reberg-Horton 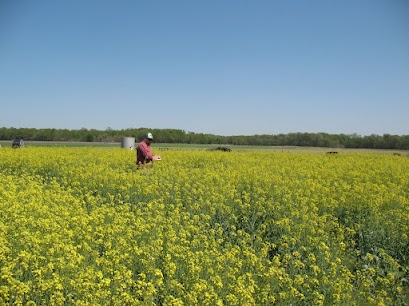 by Rachel Atwell and Chris Reberg-Horton

Organic canola production in North Carolina can fill the demand for organic canola and allow producers to diversify their rotations. Canola is a cultivar of rapeseed which is used to produce an edible oil, and can be used as meal for livestock production. Organic canola can serve as a meal source for organic dairies throughout North Carolina. AgStrong, a canola crusher in Northern Georgia, is looking to expand contracts with producers to grow more organic and conventional canola in North Carolina. Currently they have just over 1000 acres being produced this year.

Previous research indicates that high seeding rates coupled with narrow row spacing could alleviate some weed pressure in organic production systems. Research was conducted from 2011-2012 in Goldsboro, Kinston, and Salisbury, NC to assess the effects of row spacing and seeding rate on weed competition and yield in organic canola production. Canola variety ‘Hornet’ was used at all locations. Row spacing’s included 6.7, 13.3, and 26.7 inches, and seeding rates ranged from 3-15 lbs/acre. Typical row spacing’s for canola would range from 6-8 inches, with typical seeding rates for planting with a drill ranging from 4 to 6 lbs/acre (Canola Production in Georgia, University of Georgia).

These research trials are being conducted again this year in Goldsboro, Kinston, and Salisbury. The canola stand looks great in Salisbury. Kinston and Goldsboro both experienced wet conditions over the winter, which can slow canola growth and increase disease pressure, ultimately leading to a reduction in yield. Disease pressure in the rosette stages appeared to be low at all locations.

Canola harvest for this season’s research trials should occur in early June. A detailed report on yield from the organic canola seeding rate and row spacing trials over the past two years will be coming in July! If you wish to tour the canola plots in Salisbury this month, please contact Chris Reberg-Horton at 919-515-7597.